Update: The image below showing off the collection can now be found on the Warhammer 40,000: Conquest site. As a result, I have removed a paragraph concerning speculation over the inclusion of the terrain as part of the standard or premium subscription. Looks like it’s all in there, fellow hobbyists! It is also worth noting that the numbers below are estimates based on the cheapest possible alternative. Some of the miniatures I figured as Easy To Build may in fact be the completely poseable versions.

Two days ago I wrote about Warhammer 40,000: Conquest, its return and what it might contain. We’ve had a few hours since then, some from Hachette and Games Workshop themselves, and some from exceptional internet sleuthing. Part of which gives me the chance to present you with an estimated value of the entire thing. So let’s dive in to the new stuff that we know and then, finally, get to the full value of the set as we know it.

The Warhammer 40,000: Conquest website now confirms that the series will run for 80 issues. Sounds good and sounds like Hachette’s normal method. That means, with some math culled from yesterday, the roughly £625 cost of the collection still stands, assuming you subscribe straight away.

But wait. There’s more. Sorry about that. I’ve been watching lots of infomercials recently. Don’t judge me. Now, Hachette are also offering a Premium subscription. I’ve had personal experience with these in the Warhammer 40,000: Legends Collection, where for an extra £1 or so per issue, I get some extra free gifts and 6 art prints. Was it worth it? I think so. In Warhammer 40,000: Conquest though, the Premium subscription costs an extra £1.50 an issue, for which you will receive extra materials, fold out boards, dice, cards, and more. What that ‘more’ is we don’t know, but I wouldn’t be surprised if it was some sort of special unit of miniatures or terrain. Should you be interested in it, the Premium subscription ups the cost of Warhammer 40,000: Conquest from roughly £625 to £745. That’s a £120 jump. We’d rather hope it was something good to be worth that, wouldn’t we.

Now for what you’re actually here for. The value of Warhammer 40,000: Conquest. I must be clear here, this image has not been confirmed to be true or correct by Games Workshop or Hachette. Where it came from I’m not sure. Somebody I know from Twitter got it from somebody they know who got it from I don’t know where. Below is the image in question. 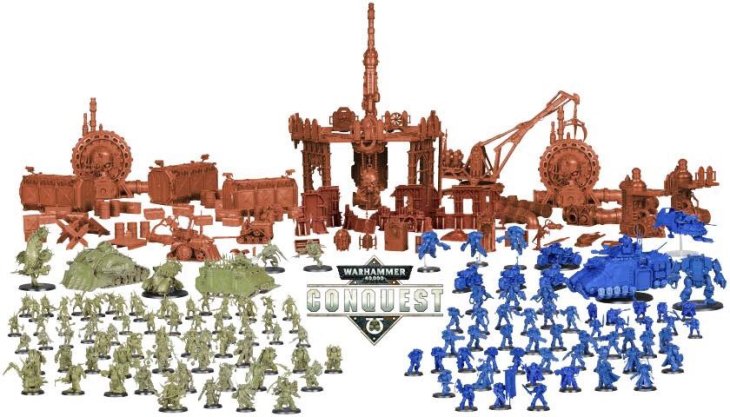 Look at all that stuff, eh?! Terrain, and what look to be sizeable Warhammer 40,000 armies. How much is it all worth, you ask? I put on my good glasses, squinted at the screen a bunch and did some fast calculations for you. Here goes.

In the following list I’ve added in brackets either the cost of the miniature in question or the box which it comes from. To make it easier, I’ve left the cost of pieces which you could get in either First Strike or the Dark Imperium box set blank, though I have added half the cost of each box (£12.50 for First Strike and £47.50 for Dark Imperium) in the final value calculation. Let’s do this!

26 Poxwalkers (Dark Imperium + First Strike) Might be more. They are hard to count.

Easy to Build Lord Felthius and The Tainted Cohort £25

Wow. Okay. That’s a lot of money. Also, that’s a hell of a lot of stuff. I’m going to admit here that some of the image is muddled for the Death Guard and a few elements I couldn’t quite work out for definite (particular that smudge just below the Myphitic Blight-Hauler). On the whole though I’m happy to say this feels on the money.

Same deal here as before. I’ve marked which units or models can be found in First Strike or Dark Imperium and, again, I’ll add £60 to the total at the end of this to show their value in half of these box sets.

Again. Not an amount of money to sniff at. It’s also worth bearing in mind with this list in particular that there is another model in there. One with a sword half out of his scabbard.

That appears to be an exclusive miniature which, at this time, is only available in Warhammer 40,000: Conquest. I’ve left its value out of the overall value because estimations take time and could wildly affect the calculations here.

That’s the green and blue bits of the image done. Let’s look at the ruddy brown, all of which is terrain available from Games Workshop

Galvanic Magnavent or a Promethium Forge, I’m not sure. £45

For the grand total here, based on the estimates I’ve shown above, Warhammer 40,000: Conquest in miniatures alone is worth £876. That… that’s a lot of money. A lot of saving too! If you take on the premium subscription you save £131 and if you go for the basic subscription you save a whopping £251! Yowser.

Remember too that with this subscription you can also expect to get hobby and gaming supplies included like paints, brushes, and dice. We don’t know quite in what combination or how deep into the Citadel Hobby Product ranges they’ll go. Whatever way you look at it, that’s quite the saving.

What do you think?! That’s a lot of money, yes, but you’re getting a lot of model for. Let me know on Twitter or right here in the comments.